The capacity of the Stringo 450 vehicle mover was recently upgraded 50% to three metric tonnes, meaning that the Mover can now also move Vans and light Trucks as easily, safely and efficiently as it moves lighter vehicles. With increased capacity, all company operations can be improved while retaining and improving time and surface area efficiency.

“All our Models are designed to increase efficiency in moving and utilisation of floor space and to improve work environments and safety,” says Anders Bergkvist, Marketing Manager at Famek AB, Developer and Manufacturer of the Stringo Movers. “Bridging the gap between lighter and slightly heavier Movers like the Stringo 450 helps meet our customer’s needs and gives them considerable economic advantages.”

Since you don’t need spaces to open the Vehicle’s driver door, surface area can be used more efficiently, even for heavier vehicles. According to Bergkvist, the surface area for parking can be decreased up to 25%.

The Mover can turn on its own Back wheel’s axis, which provides efficient use of surface areas. For the Stringo 450, the turning radius needed, is the Vehicle’s length plus 700 mm. Since January of this year, the Product has also been furnished with an audible warning when the Battery needs to be charged. Normally, the Battery provides six hours of continuous operation and can then be charged in the nearest Electrical outlet.

Like the other Stringo Models, the Stringo 450 has many Options that further enhance Vehicle handling. One such option is a Ride-on Platform for the Operator that enhances Safety, is ergonomically beneficial and increases efficiency.

Increases efficiency no matter what the task’s are

Since you don’t have to use the Vehicle’s own Engine, there is no risk of Exhaust Emissions.  All Stringo Models are very easy to handle with Push buttons. Transporting Vehicles with its own Electric motor eliminate the risk of stress injuries.

Various Models of the Stringo are used by Auto makers throughout the World as well as Machine shops, Garages, Parking ramps, Auto paint shops, Museums and Exhibition halls. In several countries, Police Departments are using Stringo to transport Vehicles in order to not destroy Forensic evidence.

Besides the six basic Stringo Models, there is also Custom made Models for tasks that require highly efficient, safe and ergonomic vehicle moving.

The various Stringo Models cover all needs. From the smallest, the “CM”, which is suitable for moving Cars short distances weighing up to two tonnes, the 360,450 and 550 Models, to the largest one, the 700 - for vehicles up to five tonnes and longer distances. /ins


About the Company Famek AB:

Famek AB, the Developer of the Stringo, has more than 20 years of leading experience designing Products that increase efficiency and safety and improve work environments where vehicles needs to be moved around. Today, Stringo is to be found in more than 35 countries on all Continents. Famek is a World leader in developing Products for Efficient, Safe and Exhaust-free transport of Vehicles from two to five tonnes in all environments.

The Stringo 450 was upgraded to be able to move cars weighing up to three tonnes, while it’s still the same size and weight.
© Famek AB

The Stringo 450 can be equipped with a Ride-on Platform for the Operator to stand on during transport, which enhances safety, is ergonomically beneficial and increases efficiency.
© Famek AB

The upgraded Product has the same measurements and weight as before. It can turn around a vehicle on its own back Wheel’s axis. The turning radius needed is the vehicle’s length plus 700 mm for the Stringo 450.
© Famek AB

The Stringo 450 can pull and transport Vehicles weighing up to three tonnes. It weighs 335 kilos/738 lbs and is powered by a 24 V motor with a 1,000 W Battery with six hours of operation time. 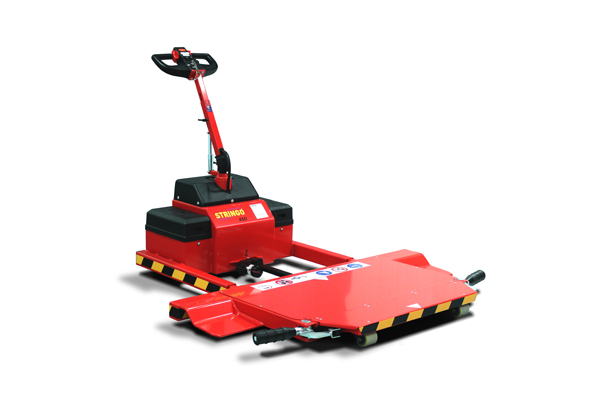 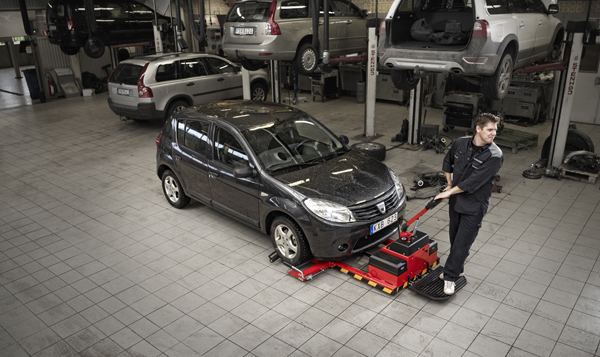 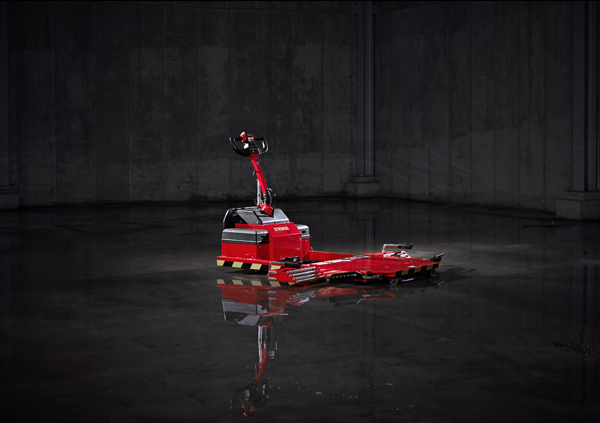